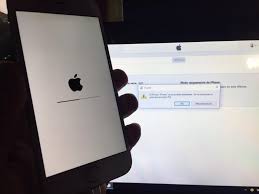 iPhone users have been up in arms recently over the appearance of Error 53 after an iOS update. Christina Warren writing for Mashable:

“What is Error 53? Well, it basically turns your iPhone into a brick. Why? Well it all ties into the Touch ID sensor on your phone. “

This is basically what happens when an iPhone is repaired at an unauthorized repair center and the repair involves changing the home button:

“The problem occurs when an unauthorized repair center replaces a home button. At first, the phone might work — with everything, including Touch ID, seeming perfectly fine.

But as soon as you go to update to a newer version of iOS (or you attempt to restore your phone from a backup), the software checks to make sure the Touch ID sensor matches the rest of the hardware. If it finds that there isn’t a match, your phone is basically bricked.”

This should not come as a surprise to anyone. The home button is also the location of the fingerprint scanner. The scanner is integral to the security of the phone. It is tied to Touch ID and Apple Pay. Any changes to that could represent an attempt to hack a phone.

Apple would have been better served by disabling both Touch ID and Apple Pay when a faulty or different sensor was detected. This approach would have alerted a user that the home button was changed or tampered with and preserved security by disabling Apple Pay.