El Capitan was announced as a major point release to OSX. However, unlike previous releases, this was meant to be focused on stability and bug fixes. With the pace of development increasing and new features, OSX was believed to be less stable than before. This release was meant to fix these shortcomings. Fortunately in addition these, Apple also added a few small features. One of which was a split screen view. 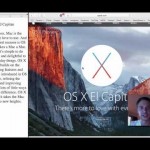 This is split screen view is very similar with what is on the iPad. You can split the screen in half horizontally. This allows you to run two apps side by side and share data between the two.

Using it is straightforward. It is essentially an addition to the full screen view on the OS. So rather than click on the green full screen icon, you hold it down to activate the split screen view.

When you do, you will the screen split into two zones and you can drag the window you started with to either the left or right zone. Once you do the window will minimize to fit the area.

You will now be prompted to choose an open window to fill the other space. Please note that you have to select another window. Not doing so will mean the initial application will go full screen. This is not like the tiled window approach in Windows. If you use multiple windows at the same time, try it, it is one of the best new addons to OSX in recent memory.

Previous:5 Mac Hacks That Are Very Useful
Next: What is Error 53