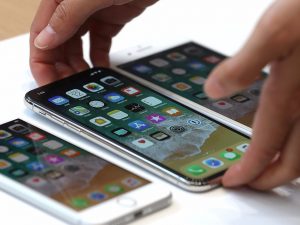 Earlier this week, during its annual iPhone launch event, Apple launched the new iPhone X. The iPhone X is a new phone besides the usual lineup of the iPhone and iPhone Plus. This year the full lineup is the iPhone 8, iPhone 8 Plus, and the iPhone X.

This is the most expensive Apple phone ever released and has several features that set it apart from the iPhone 8. The first major change is the screen. The new phone is the first Apple device with an OLED screen and is almost entirely bezel-free. The second new feature is Face ID, which unlocks the phone using a series of sensors. The iPhone X has a notch on the top of the phone to accommodate the sensors for the new face recognition system.

The iPhone X represents a new and more expensive part of Apple’s smartphone lineup. In the last few years, Apple has found it difficult to keep up with the introduction of new technologies to its phones. Apple cannot produce new components at large enough volume. Unlike its competitors, Apple sells around 100 million of its flagship phones a year, and you cannot produce cutting-edge technology like OLED screens at that volume.

The only concern for Apple, is the new phone cannibalizing sales from the iPhone 8. Customers might wait until there is enough supply of the X rather than buy an 8.